Mostly NIOS 12th & 10th Class Main examination will starts on first week of March 2014. National Institute of Open Schooling Board Class XII Hall Ticket/ Admit Card 2014 will be released in the September month, so you have any questions, ask us through the comment box. We are pleased to help you. 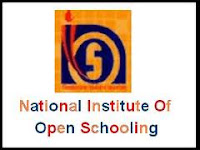 2.The public examinations are held twice a year in the months of April–May and October–November on dates fixed by the NIOS. However, one is also eligible to appear through On Demand Examination at Secondary Level and Senior Secondary level in those subjects only in which a candidate have admission in NIOS.The Board has regional offices in Delhi, Hyderabad, Pune, Chandigarh, Kolkata, Bhubaneswar, Kochi, Bhopal, Allahabad, Patna and Dehradun.